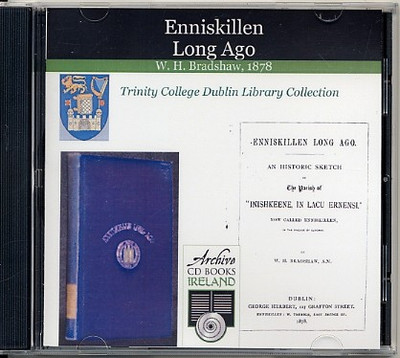 The historical development of the town and parish of Enniskillen in County Fermanagh is the subject of this important publication, by W.H. Bradshaw. The opening chapter focuses on the development of Enniskillen town, the principal urban centre in County Fermanagh, straddled between the two Lough Ernes. The town was incorporated in 1612, with William Cole appointed as the first provost. Although the early development of the town is detailed, the part played by the town during the various seventeenth century wars is, unsurprisingly, particularly prominent. So too is the destruction of the town by fire in 1705, when '114 families and their servants suffered very severe losses', which necessitated a general collection of throughout the kingdom for the relief of the suffering inhabitants.

The remaining ten chapters of the book focus on various facets of the history and development of the parish. Unlike today, the ecclesiastical parishes of the Anglican Church during the seventeenth and eighteenth centuries had civil as well as spiritual responsibilities, with the Church of Ireland parish operating as the lowest layer of governance. This aspect of the Enniskillen is covered in considerable detail, with issues of social order, security, road building, public health and welfare and education all attracting the attention of the author. In the ecclesiastical sphere, the central place of the parish church and churchyard is detailed in the course of five chapters. The author details the successive modifications that were made to the church, in response to an increasing population during the seventeenth and eighteenth centuries. Other notable features to be considered include the
various monuments and murals in the church, the tombstones in the graveyard and the extant parish registers.

Included at the back of the book are copious notes regarding various aspects of the parish, which may prove of even greater use to researchers. It is notable in this regard that while the eleven chapters run to just seventy two pages, the twenty nine notes span a further eighty pages. In typical antiquarian fashion, these notes include descriptions of local antiquities, transcriptions of relevant source material, biographies of noted parishioners, parliamentary or privy council edicts and other diverse, valuable information.

A highly readable account of the development of the town and parish and packed with notes and transcriptions it will prove particularly appealing to any researchers interested in the history of Fermanagh and West Ulster, particularly from the plantation of the county during the early seventeenth century.