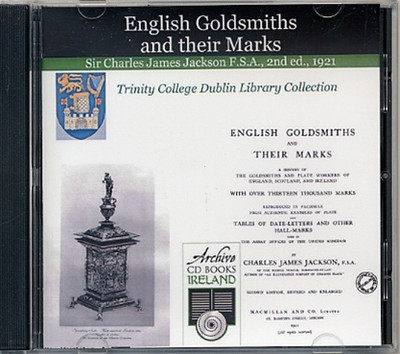 English Goldsmiths and their Marks

The short title of Sir Charles James Jackson's incredible publication, 'English Goldsmiths and their Marks', belies the true extent of this monumental book. Published in London in 1921, this incredibly learned tomb extends to more than 750 pages and its full title provides a much better idea of its scope: "English Goldsmiths and their Marks: A History of the Goldsmiths and Plate Workers of England, Scotland and Ireland with over 13,000 Produced in Facsimile from Authentic Examples of Plate and Tables of Date-Letter and other Hall-Marks used in the Assay Offices of the United Kingdom".

More than a quarter or 200 pages of Jackson's work is given over to Ireland and provides a fascinating history of Dublin goldsmiths and Irish goldsmiths in general for the period anterior to the Norman Conquest of Ireland, but is especially informative on the development and incorporation of the Guild of Goldsmiths in Ireland from their Dublin Charter of 1557 and through the records kept by the Corporation of Dublin, including a copy of the Charter of the Goldsmiths Company of Dublin.

A history and examples of the apprenticeship undertaken by goldsmiths is given until the point at which the apprentice produced his 'master-piece' at which point he was elevated within the Guild to the rank of quarter or foreign-brother.

A lengthy description is provided on the marks of Dublin goldsmiths, which since their charter of 1657 have consisted of the harp crowned, the goldsmith's proper mark and the date letter. Two addition marks were later added, namely the 'figure of Hibernia' and the sovereign's head. Jackson provides also provides an extensive commentary on the evolution and inclusion of these marks and the most accurate illustrative table of date-marks and marks used on Dublin plate between 1638 and 1921. These marks are accompanied by examples of the work of the master goldsmith that produced the work, a description of the article assayed as well as the identification of the person who commissioned/owned the piece in question.

'English Goldsmiths and their Marks' also contains a chronological list of Dublin Goldsmiths from 1200 to 1904; a list of masters and wardens of the Guild from 1637 and a list of Freemen of the Guild, which includes the date that the goldsmith was made a freeman, together with the last notice of the freeman in the Guild's records or notice of the freeman's death. Importantly, these lists also include freemen who were admitted to the Guild, but were silversmiths, watchmakers, clockmakers and jewellery makers by calling.

Also included is a table of enrolments of Dublin apprentices from 1634 to 1813, which includes the name of the apprentice, his parents and the master to whom he was bound and a list of quarter brothers and journeymen. Jackson also provides details on Irish provincial goldsmiths, silversmiths, jewellers and watchmakers from 1784 to 1827, which are arranged by county and year admitted to the Guild, together with lists of Irish provincial marks and examples of provincial gold and silver plate.

Jackson's English Goldsmiths has no peer in the breadth and depth of material and has fully utilised the available unpublished manuscript sources on the freemen and apprentices of the Irish Guild of Goldsmiths.