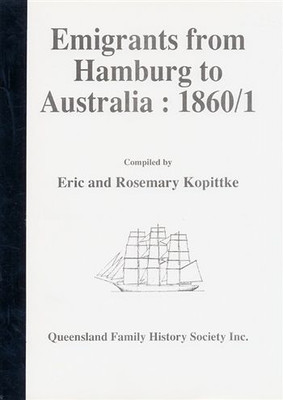 Emigrants From Hamburg to Australia 1860-61

Passenger lists from the original Hamburg lists of passengers departing for Australia from the port of Hamburg in 1860-61. Listed by ship, with an index to emigrants.

Details generally include the former place of residence, and occupation of the emigrant. For each ship physical details are listed together with newspaper reports published on the arrival of the ship in Australia. Includes introductory guide to use of the lists, notes on sailing vessels, German letters, occupations, a table of German place names, list of sources and bibliography.