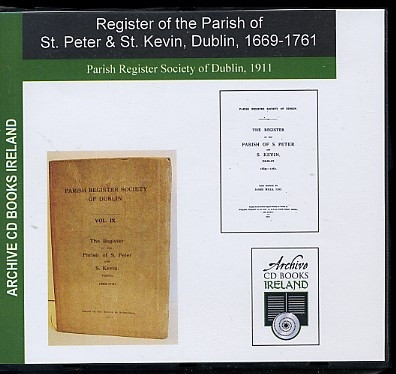 This volume, volume IX of the books produced by the Parish Register Society of Dublin, was first published in 191 and covers the registers of the Parish of St Peter & St Kevin, in Dublin for the period 1669-1761. Republished here on fully-searchable CD-ROM this republication contains the Christening, Marriage and Burial Registers from the first two surviving parish registers.

By Act of Parliament on 1875 the parish registers of the Established Church of Ireland were placed under the Control of the Master of the Rolls. However, by the time of the publication of volume I of the Parish Register Society in 1906, one of the main conditions of the Act, namely the concentration, collection and depositing of the parish registers of the former Established Church in the Public Record Office of Ireland in Dublin, had not taken place. In a sense and with hindsight this transpired to be fortuitous as many of the parochial records that did find their way to the Public Record Office were destroyed in the infamous 1922 fire. In line with the formation of a number of Parish Register Societies in England, it was deemed necessary by the founding members of the Parish Register Society of Dublin to make publicly available the older and more important surviving parish registers of the Established Church of Ireland, beginning with the oldest in the country, those of Dublin City, for the valuable work undertaken by genealogists and local and family historians.

During the Restoration Dublin City began a period of rapid expansion and from the centre out to the periphery and this marked the rapid growth of the population within the Parishes of Saints Peter and Kevin, the bounds of which stretched as far as Rathmines, Haroldscross and Milltown to the south and east and to Aungier Steet, Bishop Street and Saint Stephen's Street in the west. However, because of the growth of the population within the parish a new church was required and in 1707 portions of St. Peter and St. Bride were taken to form the new parish of St. Anne. The current republication is a reprint of the earliest two parish registers for the union of Saints Peter and Kevin. The first register contains 476 pages and begins with the Vestry Minutes of St Kevin's for the year 1669. The second register contains 118 parchment folios and commences in 1721 and ends in 1761. In the main the Christening Registers provide the child's name, parents' names, addresses and some cases the father's occupation. Likewise, the Burial Registers provide the name of the deceased, marital status of women and addresses. This republication also includes confirmation lists for the parish for 1722 and 1726 as well as a comprehensive names index. The Republication of this number in the series of the Parish Register Society of Dublin remains as relevant to the genealogist and family historian today as they were when the registers were first written.

Republished here on CD-ROM, the Registers of St Peter & St Kevin, 1619-1699 are fully searchable and are a welcome addition to genealogists and family historians with family connected to the region.