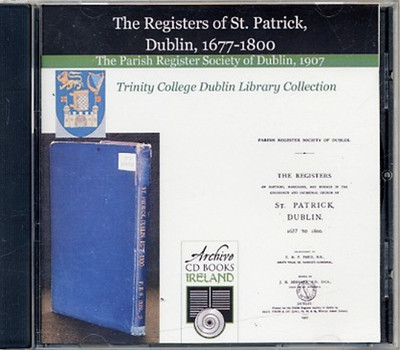 Published in 1907 as volume II of Parish Register Society of Dublin, The Registers of Baptisms, Marriages & Burials in the Collegiate and Cathedral Church of St. Patrick, 1677-1800, was transcribed by the then Dean's Vicar of the Cathedral, C. H. P. Price and edited by J. H. Bernard, the Dean of St Patrick.
Few records from the antiquity of St. Patrick's are now extant and only a few broken Celtic crosses without markings pre-date 1219 when St Patrick's became a Cathedral. At this time ground was acquired to the south and east of the church for burial and in old records is known as the 'Old Churchyard' or 'Vicars' Bawn'. By the 17th century this burial ground had become overcrowded and new land was consecrated for burial purposes to the south of the Deanery. Known as the 'New Churchyard' or the 'Cabbage Garden' these survived down to the beginning of the 20th century. In addition to these graveyards, St. Patrick's also contains the 'French Churchyard'. Situated to the south of the Cabbage Garden, this served Dublin's Huguenot community in Dublin who worshipped at the Lady Chapel in St. Patrick's for some 150 years.

Needless to say, the Registers of St Patrick hold burial records for some of Dublin's most eminent citizens such as Jonathan Swift and his 'Stella' as well as fourteen Archbishops of Dublin and a further ten bishops and archbishops, numerous deans, ecclesiastical men and three Lord Chancellors. However, it might come as a surprise to learn that the number of burials and interments far outweigh baptisms and marriages. The reasons for this are simple: the area in which St. Patrick's is situated has never been fashionable and as such was never the place of choice, burial is another thing altogether. As for marriage, most marriages in the Established Church were formalised by licence rather than by ceremony. These marriages, of which there must have been many, did not find their way into the St Patrick's Registers.

The Registers republished here extend to some 110 pages and a full index of personal and place names are presented at the end of the Registers. This does not, however, cover the small Appendix attached to the publication, which includes interments in the Cathedral and Old Churchyard. These include, in 1652, the burial of Lt. Col. Prime Iron Rochfort, who was executed at the behest of Oliver Cromwell after fighting and winning a duel.

Republished here on CD-ROM, the Registers of St Patrick, 1677-1800 are fully searchable and a welcome addition to genealogists and family historians.