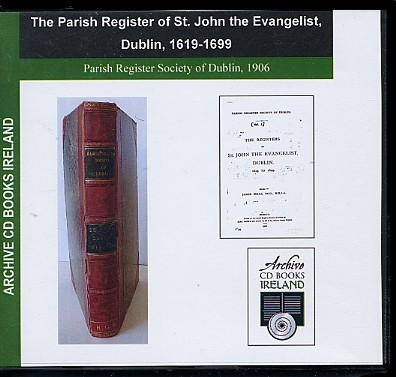 By Act of Parliament on 1875 the parish registers of the Established Church of Ireland were placed under the Control of the Master of the Rolls. However, by the time of the publication of volume I one of the main conditions of the Act, namely the concentration, collection and depositing of the parish registers of the former Established Church in the Public Record Office of Ireland in Dublin, had not taken place. In a sense and with hindsight this transpired to be fortuitous as many of the parochial records that did find their way to the Public Record Office were destroyed in the infamous 1922 fire. In line with the formation of a number of Parish Register Societies in England, it was deemed necessary by the founding members of the Parish Register Society of Dublin to make publicly available the older and more important surviving parish registers of the Established Church of Ireland, beginning with the oldest in the country, those of Dublin City, for the valuable work undertaken by genealogists and local and family historians.

There would appear to have been no obligation to keep parish registers in Ireland until the Canon of 1634, although there had been an abortive attempt to introduce a form of public registration as early as 1617. However, this was discontinued in 1620 in a row over fees, the year after the commencement of the St. John's registers. The Canon of 1634 required every parish and chapel in Ireland to keep a book wherein must be written the day and year of every Christening, marriage and burial. The Canon does no appear to have been strictly enforced as no registers in Ireland begin immediately after the date of instruction. Only two registers in Ireland pre-date the Canon, that of St John's and St Brigid, Dublin and in only five other instances are registers known to pre-date 1642.

The Parish of St John encompasses some of the oldest areas of Dublin, including Fishamble Street, Smock Alley, Winetavern Street, and the old Blind, Essex and Wood Quays. Due to its proximity to the quays and their numerous boarding houses, apart from the presence of fourteen ennobled families, bishops and the like, these early registers for St John's contain numerous entries for transient and visiting individuals to Dublin. The entries contained in this publication were kept in two separate parchment registers; the first of 45 folios begins with the burial of John Hubbords on 12th June 1630 and the second contains 131 parchment folios.

This publication also includes two very interesting and useful appendices. The first is the Churchwardens' Account Books, which include many interment and burial records not present in the parish registers; the second consists of lists of individuals rated for parish cess for the years 1621, 1646 and 1687. These lists provide the names of the cess payers, their addresses in the parish and in many cases the cess payers occupation. Included within the Registers are the remarkable lists of Poor English people who flooded into the parish as a result of the Rebellion of 1641 and who subsequently died and were buried in St. John's as well as a list of the poor soldiers buried in the parish after 24th April 1642.

The first volume of the Parish Register Society of Dublin is concluded with lists of place names and people. Containing some 349 printed pages the Parish Registers of St John the Evangelist, Dublin, are as relevant to the genealogists and family historian today as they were when the registers were first published.

This product contains high quality scanned images of the original volume. It has been bookmarked for easy navigation, and pages can be searched, browsed, enlarged and printed out if required.