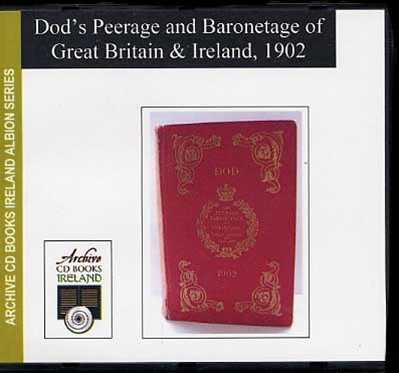 Dod's Peerage and Baronetage of Great Britain and Ireland 1902

First published in 1902 and republished here on fully-searchable CD-ROM is the 62nd edition of Dod's Peerage, Baronetage & Knightage of Great Britain and Ireland. Published in London by Sampson Low, Marston & Company, this edition of Dod's Peerage & Baronetage contains nearly 1,100 printed pages and details 'All the Titled Classes' in Britain and Ireland for the year in which it was published and as such is an invaluable biographical companion.

Charles Roger Phipps Dod, the originator of Dod's Peerage and Baronetage was born at Drumlease, Co. Leitrim, in 1793, the son of Roger Dod the vicar of Drumlease by his second marriage to Margaret Phipps. Educated at Trinity College, Dublin, Dod entered King's Inns in Dublin in 1816 with the intention of embarking on a legal career. However, after becoming the part-owner of a provincial newspaper, Dod gave up his legal career, and moved to London in 1818. For the next twenty-three years he was associated with the Times. Under Dod's direction the Times' reporting of parliamentary debates became more accurate and impartial was in large part to Dod's management of the reporters in his charge. Dod succeeded Horace Twiss at the Times as compiler of the summary Parliamentary debates while at the same time contributing to the paper's obituary memoires. It was these experiences that led Dod to issue his first long-lasting reference work, Dod's Parliamentary Companion. First issued in 1832 it recorded the first Parliament to sit after the passing of the Great Reform Act of 1832 and has been published annually ever since and is currently in its 178th edition. Respected as the most accurate, informative and impartial source for information on the Houses of Parliament and the Civil Service and remains the most trusted resource in the political arena.

Dod's Peerage, Baronetage and Knightage was first published in 1841 has been revised and published annually since its first issue and is now incorporated into Dod's Parliamentary Companion. This 62nd edition, published in 1902, carried the full tile Dod's Peerage, Baronetage & Knightage of Great Britain & Ireland for 1902, including all the Titled Classes. The first part of the publication provides a general dictionary on ten classes of Peers, etc., and in each instance details are provided on their 'titles, parentage, descent, ages, birthplaces, marriages, education, professions, residences, public services, offices' together with other relevant historical, personal and professional details. The classes covered under part 1 include peers, peeresses, bishops, baronets, Scottish judges, the Privy Council and knights of most orders including knights bachelor, which include most of the eminent religious, legal and medical men of the realm. Part two provides biographical details on more than 4,000 first sons and daughters of peers bearing courtesy titles.

Dod's Peerage, Baronetage & Knightage of Great Britain & Ireland is a complete reference dictionary for the titled classes as well as many others bearing honours for the year in which it was published and as such must prove to be an invaluable edition to any collection.