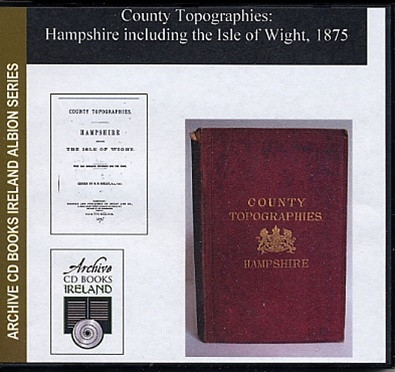 County Topographies: Hampshire including the Isle of Wight 1875

Printed and published by Kelly & Co., in London in 1875, County Topographies: Hampshire contains in excess of 450 printed pages and includes an extensive section on the Isle of Wight. Topographical directories usually provide a plethora of fascinating local information on the areas on which they treat and this publication is no exception.

The general preface to this publication notes that the information contained therein was directly extracted from Kelly's recently published Post Office Directory for Hampshire, but was reissued in this form to meet the wishes of many who desired a publication on the county without the names and addresses of the inhabitants of the county. Hampshire, a county of some 1,032,105 acres with a population in 1871 of over 540,000 ranked at the time of the publication as one of the largest counties in England by population. Containing 351 Civil Parishes, 22 market towns and the City of Winchester, this county topography provides all of the details on all of the towns, villages, hamlets and liberties of Hampshire provided in Kelly's Directory, without the addition of residents. This entails detailed descriptions of principal buildings, geographical objects of interest, ecclesiastical divisions of the county with descriptions of all of the churches, cathedrals the value of the livings, parochial incumbents and patrons, principal seats, civil and local administration of the county with full information on county courts, districts fairs, markets, county hunts as well as communications such as rail and post.

For those unfamiliar with topographical directories such as this or indeed directories and gazetteers such as Kelly's Directory the treatment by this county topography on one of the many villages noticed serves to illustrate the general extent of the detail contained therein. Burghclere is described as a parish and village 3 miles south of Newbury station, 4 miles west from Kingsclere and 58 miles from London. Situated in the diocese and archdeaconry of Winchester and the rural deanery of Andover the parish contained two churches. The older of the two, that of All Saints, was completely restored in 1861 and its registers date from 1559. The newer, dedicated to the Blessed Virgin Mary, was built in 1838 and greatly enlarged under the patronage of the Earl of Carnarvon. The Living was a rectory with an annual value of £1,200, with a residence and glebe of 188 acres held by the Rev. Portal, domestic chaplain to the Earl. Petty sessions were held monthly at the 'Carnarvon Arms'. The place was probably a Roman Station, the soil mainly of wet gravel and principal crops of wheat, barley and oats grown on its 5,080 acres. With a population in 1871 of 765, the parish contained a number of gentlemen's seats and mansions, such as Adbury Park, the handsome manor of William Fox, J.P., one of the principal landowners in the parish, together with the Earl of Carnarvon. Beginning with the village and parish of Abbott's Ann and ending with the Yaverland, the parish and liberty on the Isle of Wight, the level of detail provided in the for each is commensurate with that given for Burghclere.

Republished here on fully-searchable CD-ROM, Kelly's 1875 County Topography for Hampshire must appeal to anyone interested in the topographical description of this large and important county, its towns, villages and hamlets.