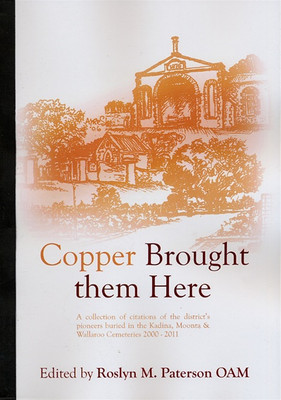 Copper Brought Them Here: Pioneers Buried in the Kadina, Moonta and Wallaroo Cemeteries

This book is a collection of one hundred and seventy citations presented at the Dressing the Graves ceremonies at the Kernewek Lowender on Northern Yorke Peninsula from 2000-2011. The collection of citations are fascinating accounts of emigration, life, love, marriage, children and death. The copper mines and smelters of this historic area attracted a large number of Cornish, Welsh, Irish, Scots, English, German, Prussian, Italian and American people.

Miners, engine drivers, wharf labourers, seamen, fishermen, farmers, builders, stonemasons and mine stable hands are mentioned invariably with the ship they emigrated on. Dressmaking, midwifery, homemaking, religious teaching and shop keeping were some of the female occupations of those remembered. Religious conviction steadfastness, hope and charity formed part of the character of the people who settled on the Copper Coast.
Early in the life of the event, the citations were added to the website www.kernewek.org but over time, the research team realised that the material gathered was historically significant and so this book with its grave-yard maps, photos of the peoples headstones and brief biographies came about. Initially historians used obituaries but later, descendants submitted their own material which was checked by Fellows of the South Australian Genealogy and Heraldry Society and a retired member of the Professional Historians Association of South Australia.

So if you want a good read of life on the mines and in the smelters and all it has to offer in the 150 years that this book covers  buy this book!