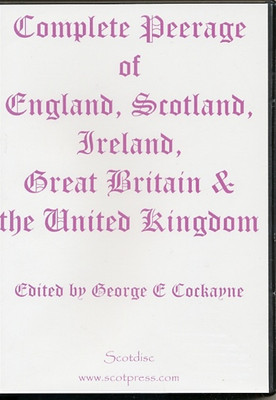 Originally published in 1887-1898 in 8 volumes (3688 pages) by George Cokayne, this magnificent work has now been re-released as a facsimile on CD-ROM.

This monumental, multi-volume study of the peerage of England, Ireland, and Scotland provides extensive biographical, genealogical, and political information on literally thousands of families and the titles which they held.

It attempts to trace, title by title, family by family, the history of those who held the titles of baron, viscount, earl, marquis, and duke in all three kingdoms that constituted Great Britain in the 19th century. The Irish peerage remained separate, as did the Scottish and English peerages prior to union in 1707. After that date, creations were made in the peerage of Great Britain, with further additions to the peerage of Scotland prohibited by the terms of the Act of Union.

Cokayne thus combined some four distinct peerages into one history and thereby provides a massive body of material on families from throughout the British Isles. Extensive footnotes, as well as detailed genealogical charts, amplify the history of these families which were, for a time at least, among the greatest in the realm. This is one of the essential research tools for anyone working in the genealogy and history of the British Isles.

Wikipedia mentions that "Cokayne is generally considered superior to both 'Debrett's Peerage' and 'Burke's Peerage', especially in the field of genealogy".

High quality scanned images of the whole of the original book. This CD has been bookmarked for easy navigation, and pages can be browsed, enlarged and printed out if required. Please note: these CDs are NOT searchable.