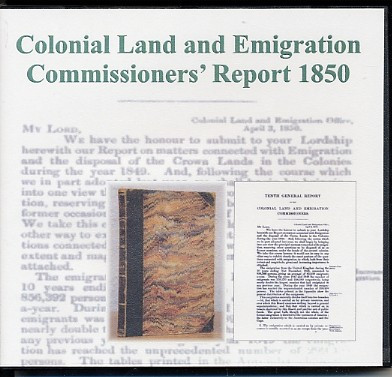 This official report, the 10th general report of the Colonial Land and Emigration Commissioners, will give useful insight to family and general historians of the state of the various colonies in 1850. This covers the first 58 pages of this volume. The remaining 160 pages however is taken up with 56 appendixes covering a wide range of interests touching most of the British colonies. It is here that much fascinating material can be gleaned.

New Zealand
No. 23. - New Zealand. A Proclamation prescribing Regulations for the Depasturing of Cattle on the Waste Lands in New Ulster

North American Colonies
No. 24. - Canada. Extract from a Report of a Committee of the Executive Council on matters of State, 5th February, 1850, on Facilities of Transit through the Province

West Indies
No. 30. - Return of Immigrants introduced into the West Indian Colonies and Mauritius since the Abolition of Slavery, to the end of 1849
No. 31. - Agreement with Messrs. Hyde, Hodge, and Co.

Originally produced by Archive CD Books Australia in 2004, this title has now been remastered and re-released, and includes better searching capability. This CD contains high quality scanned images of the whole of the original book, and has been bookmarked for easy navigation. Pages can be searched, browsed, enlarged and printed out if required.

The whole 218 page volume, is searchable - names, subjects and any other words.

High quality scanned images of the whole of the original book.

SAMPLE ENTRY:
From: Tables exhibiting the Selection and Character of Emigrants, and the Conduct of the Surgeons, &c
- Name of Ship: General Hewitt.
- Selection and Character of Emigrants: Immigrants of good description, with the exception of some of the single females, who were of bad character; one woman deformed
- Conduct of Surgeon: Surgeon kind, attentive, and skilful, but too easy and inactive.

- Name of Ship: Walter Morrice.
- Selection and Character of Emigrants: Nine cases of alleged ineligibility for free passages. Too many mechanics.
- Conduct of Surgeon: Surgeon devoid of energy and system.