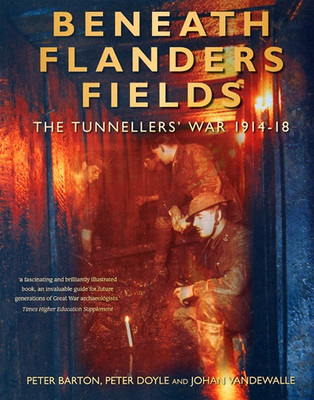 Beneath Flanders Fields: The Tunnellers' War 1914-18

Whilst the war raged across Flanders fields, an enqually horrifying and sometimes more dangerous battle took place underground. 'Beneath Flanders Fields' tells the story of the tunnellers' war, which still remains one of the most misunderstood, misrepresented and mystifying conflicts of the Great War.

The product of over twenty-five years of research 'Beneath Flanders Fields' illustrates the evolution of military mining, leading to its deployment in the greatest siege in military history - in the trenches of the Western Front.

In the Ypres Salient, the secret struggle beneath no man's land became one of engineering, technology and science - and of carefully calculated assassination. In the words of the tunnellers themselves, and through previously unpublished photographs - many in colour - as well as contemporary plans and drawings, this book reveals how this most intense of battles was fought and won. Few on the surface knew the horrific details of the tunnellers work, yet this silent, claustrophobic conflict was a barbaric struggle that raged night and day for almost two and a half years, and one which generated mental and physical stresses often far beyond those suffered by the infantry in the trenches. On 7 June 1917 at Messines Ridge, the tension was broken with the opening of the most dramatic mine offensive in history.

After Messines, the tunnellers turned their attention to the construction of deep dugouts, structures which house tens of thousands of troops, men for whom life on the surface had become almost untenable. Often electrically lit and ventilated, the incorporated headquarters, cookhouses, soup kitchen, hospitals, drying rooms and workshops. Hundreds were built, and thanks to the Flanders geology many still survive today, and seen here for the first time in photographs.

But such glimpses of these poignant time capsules are fleeting: the old dugouts are decaying and collapsing, creating serious problems on the surface for the people of Flanders today. In this way, the extraordinary work of the tunnellers has formed the final physical legacy of the Great War.

Contents:
Preface
Authors' Note
Abbreviations
Introduction
1. Flanders Fields: The Ypres Salient
2. From Siege War to World War
3. Sappers and Miners
4. Mine Warfare, Tunnellers and Pioniere, 1915
5. Kriegsgeologie: Going Underground
6. The Silent War
7. Enemies Below
8. The Mine War Deepens, 1915-1917
9. 'Earthquaking' the Ridge: Messines, July 1917
10. Mountains in the Sky: Messines and After
11. "A Hole in the Ground with a Lid On'
12. Degrees of Protection, 1917-1918
13. Back to the Front: The Legacy
Epilogue
Sources
Bibliography
Picture and Illustration References
Index