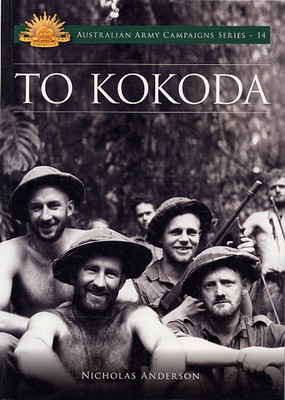 When the Japanese war machine swept through South-East Asia in early 1942, it was inevitable that conflict would reach Australian territory on the island of New Guinea. The ultimate Japanese target was Port Moresby. Conquering the capital would sever communication between Australia and her American ally and allow Japanese air power to threaten Australia's northern cities.

When a seaborne invasion was thwarted at the Battle of the Coral Sea, the Nankai Shitai landed in Papua on 21 July and launched an overland attack. Having captured the village of Kokoda with its vital airstrip, the Japanese headed for Port Moresby, traversing the treacherous Kokoda Trail that winds across the mighty Owen Stanley Ridge.

The Australian Army was ill prepared to confront the Japanese. Poorly equipped, undertrained, and unaccustomed to jungle warfare, the untested militia battalions were the first to face the battle-hardened invading forces. Later, when veteran AIF brigades were rushed forward to bolster the militia they also fell in the path of the Japanese onslaught.

But the over-extension of supply lines and disaster on Guadalcanal eventually cruelled Japanese aspirations and the Kokoda campaign became a bloody and protracted struggle as the Australian troops fought to drive the Japanese off the Owen Stanley's and out of Papua.