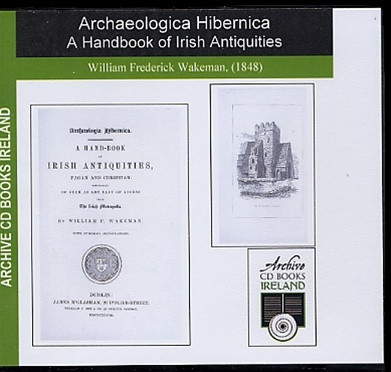 Originally published in Dublin in 1848 by M.H. Gill for the Dublin University Press and republished here on fully-searchable CD-RoOM is William F. Wakeman's "Archaeologica Hibernica: A Handbook of Irish Antiquities, Pagan & Christian: Especially of such as are easy of access from the Irish Metropolis" by William F. Wakeman with numerous illustrations.

Apart from the revolutions of nationalism that took place in Europe in the year 1848, this year is also seen by archaeologists as a revolution and Wakeman's publication, Archaeologica Hibernica, is numbered amongst these revolutionary publications. Written when he was only twenty-five, in his preface Wakeman declared that his aim and the aim of Archaeologica Hibernica was to open the eyes of the Irish to the richness of their own past, while berating travelled gentlemen of Ireland for knowing more about the River Thames than they did about the Boyne Valley. The illustrations referred to in the title of Archaeologica Hibernica were much admired at the time and and woodcuts have relevance today as they picture many of Ireland's best known archaeological treasures before they were ever seriously excavated and in a sense preserve for posterity the likes of Dowth and Newgrange before they 'tampered with' by Victorian gentleman archaeologists.

Archaeologica Hibernica contains 199 printed pages, which include 91 illustrations. The publication is divided into a number of distinct: Pagan Antiquities, those which preceded the introduction of Christianity to Ireland or were thought to have been constructed in the fifth century; the early Christian period, which includes round towers and the remains of the Anglo Irish. Under the first section Wakeman divides Pagan antiquities into five categories, namely cromlechs, pillar stones, sepulchral mounds and cairns, duns and raths and stone circles and Wakeman visited numerous sites for these examples of Pagan Ireland, including Newgrange, the Phoenix Park, Kilternan, Druid's Glen and the Hill of Tara. Section 2 treating on early Christian remains is again divided into five sections oratories and bee-hive houses - the first Christian remains in Ireland - early churches such as those at Kilternan Glendalough and Kells, early decorated churches, crosses and round towers. Part three details the monastic tradition and includes treatise on Jerpoint Abbey, St. Patrick's Cathedral, fonts, castles and town gates all of which are beautifully illustrated with fine woodcuts. Archaeologica Hibernica is concluded by some miscellaneous items of archaeological interest, which include torques and weapons of wood, stone and bronze.

Wakeman's "Archaeologica Hibernica" is a wonderful publication whose intention was to introduce the educated men of Victorian Ireland to their archaeological heritage and although many of the sites visited by Wakeman such as Newgrange, Glendalough, Kells and Jerpoint are now familiar names, his intentions have as much relevance today as they did in 1848.