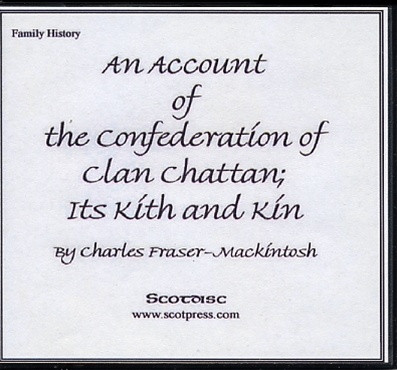 An Account of the Confederation of Clan Chattan; It's Kith and Kin

This exhaustive and extended account of all the major and minor families associated with the Chattan confederation was undertaken at the behest of the Clan Chattan Association of Glasgow.

The confederation is unique in Highland history, in that, while the Clan had its head and leader, to whom all the members gave obedience when it met as a whole, yet composed as it was of various tribes, with different surnames, it resulted that each tribe had its Chieftain, supreme over his own tribe, but subsidiary to the Captain, as a matter of prudence and policy. Clanship was necessarily, in its original form, elective and voluntary.

Here reproduced are facsimiles of the famous Bonds of Union which held this unusual Confederation together. There are as well colour illustrations of the family tartans. Families included here are: MacGillivray, MacBean, MacPhail, MacQueen, Shaw, Clark, Gow, Davidson, MacLean of the North, MacIntyre of Badenoch, MacAndrew, Farquharson, Cattenach, Gillespie, Gillie, Noble, and MacHardy. Over a century after its publication, this remains one of the most important books about the Clan Chattan Confederation.