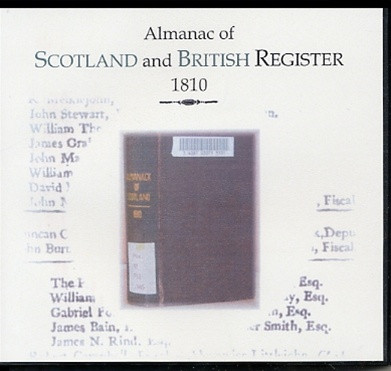 Titled "The general almanack of Scotland and British register, for 1810, being the second after bissextile, or leap year. Containing an improved kalendar, with the usual lists, and those of Glasgow, Greenock, Paisley &c.

This small but rare book an contains an assortment of information such as: taxes, carriers, principal roads, stage coaches from Edinburgh, post towns and their postmasters. Also, the peerage of Scotland, courts, magistrates, clergy, Sovereigns Princes of Europe, as the House of Commons.

There is a section on the Peerage of Ireland, as well as details of Scots stationed in the East Indies, and in the Royal Navy and Army.

The invaluable sections on Glasgow and Stirling list the names and occupation or position of thousands of people in these regions in 1810. Everyone from insurance companies, to the directors of teacher societies, to officeholders at the public library, to messengers are all listed.

Please note this CD book is searchable, but due to the broken text on the original it will not search as well as many later printed publications. But it can be browsed, enlarged and printed out if required.