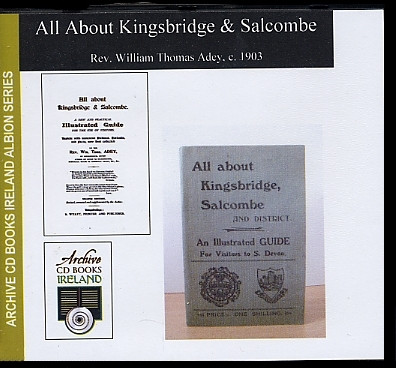 All About Kingsbridge and Salcombe

First published in 1903 and republished here on fully-searchable CD-ROM is the second and revised edition of the Rev. William Thomas Adey's All About Kingsbridge and Salcombe. Containing 174 printed pages with twenty-eight photographs of the areas in question, the publication carries the subtitle A New and Practical Guide for the Use of Visitors. Replete with Numerous Pictures, Portraits, & Facts, Now First Collected .... and was published in Kingsbridge in 1903 or shortly after.

A baptist minister, the Rev. William Thomas Adey was responsible for numerous guidebooks published between 1890 and 1910, numbered amongst which is All About Kingsbridge and Salcombe. Adey (1844-1925) was born at Leighton Buzzard an initially trained as a printers apprentice. However, in 1866 he began his first baptist ministry at Darlington. After a string of ministries in Leeds, Scarborough - where he wrote and published his first guide book, A Guide to Scarborough - Whitechapel in London before taking-up a mission at Kingsbridge in Devon in 1893. Before turning his attentions to the history of his new town, Adey published his best-known work: A Historical Guide to Kirkstall Abbey, published in his former town of Leeds in 1897.

All About Kingsbridge and Salcombe is divided into twenty-eight brief chapters and is dedicated to all lovers of Devon. Beginning with a general introduction to the 'picturesque little town' of Kingsbridge, Adey makes pains to point out that although Kingsbridge was but a distant dream for most in the 1850s, by 1903 third class tourist tickets could be purchased in London and within seven hours Kingsbridge could be reached by those with only meagre means at their disposal. Old coaching days and the towns inns and hotels are illustrated in some detail before Adey rambles through the town pointing out to his readers the most remarkable features that it had to offer using the town's churches as reference points before providing biographical sketches on some of the most remarkable men of Kingsbridge and notes on the areas flora and fauna.

The section on Salcombe begins with the 'Courtenay Walk', which was constructed by the Earl of Devon and dedicated to his visitors. Adey goes on to described 'The Bar', Thurlestone Rock and Village and many gems of the coast east of Salcombe, including Charleton, Frogmore, South Pool, Portlemouth, Prawle Point and Lannacombe and 'The Start Point' a four-mile described walk via Hallsands, Beesands ending up at Torcross Ley. All About Kingsbridge & Salcombe is concluded by the area as an anglers paradise and the civic institutions of the towns of Kingsbridge and Salcombe.

Accompanied by numerous photographs, sketches and advertisements by local traders, All About Kingsbridge & Salcombe is a little gem of a publication for this beautiful area of England.

This CD contains high quality scanned images of the whole of the original book. This CD has been bookmarked for easy navigation, and pages can be searched, browsed, enlarged and printed out if required.