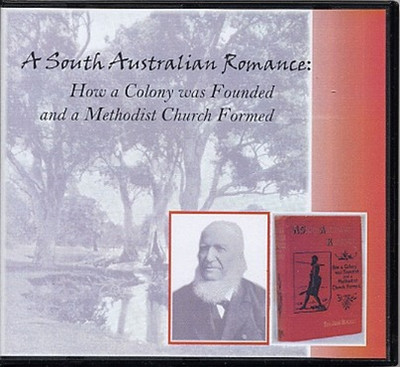 A South Australian Romance: How a Colony was Founded and a Methodist Church Formed

'South Australian Romance: How a Colony was Founded and a Methodist Church Formed' was written by Rev. John Blacket in 1899.

Samuel Stephens was the first adult colonist to set foot on South Australian soil, in 1836. He conducted services on the "Duke of York" during the voyage out. The first Methodist service was held on Kangaroo Island. In the early history of the Methodist Church of South Australia three names will forever be prominent: Edward Stephens [brother to Samuel], John C. White and Jacob Abbott.

The book was published with the purpose of informing people both about the early colonial life of South Australia and the circumstances surrounding the formation of the Methodist Church and its growth. It contains brief information about the discovery and settlement of the colony, and also the building and expansion of the Methodist Church and the individuals who played a role in it. The founders of the Congregational Church [Stow] and United Presbyterian [Drummond] are also mentioned.