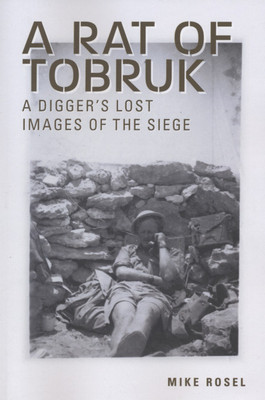 A Rat of Tobruk: A Digger's Lost Images of the Siege

It's well that a picture tells a thousand words, but Lieutenant John Rosel would never speak of the frenzy of desert combat. He let his camera tell the story of his 2/24th Battalion's odyssey from northern Victoria through to the seige of Trobruk.

Although Rosel left no diaries, and letters to his girlfriend did not survive, we're fortunate the he pencilled notes on the back of some photos - endearments, names, places and other comments. While his family shared a handful of his 600-plus images with the Australian War Memorial decades ago, the approaching 80th anniversary of the Seige in 2021 inspired them to make additional photographs more widely known.

John Rosel and the mates who shared his camera left a legacy of Australians in peace and war: in training, exploring exotic lands, sheltering in dugouts, digging, writing letters; eating fly-harassed meals in the open desert ...

Complementing Rosel's story are never-before-published letters by Private Harry Frazer, bandsman turned rifleman in Rosel's platoon. Harry's intimate, frank letters to his parents are amongst the most moving documents related to the Seige.

'A Rat of Tobruk' has many fascinating photographs – mainly taken by John Rosel – and is recommended to anyone interested in the Australian soldiers who risked all while making a substantial contribution to Allied victory in World War II.

Contents:
Prologue: 'A sunlit picture of hell'
The photographs
The photographer: Peacetime prelude
Making soldiers: 'My chaps'
Transit to war: 'Ted' and the tourists
'The Benghazi Handicap'
Last man from Benghazi
Combat in Tobruk: 'The poor old 24th'
'The May Show': Triumph and Tragedy
A message from Our Father
The Digger with the cornet
After battle: 'The Siege continues'
Australia and the Pacific
Peace?
Aftermath
Acknowledgements and thanks
Bibliography and sources
Index