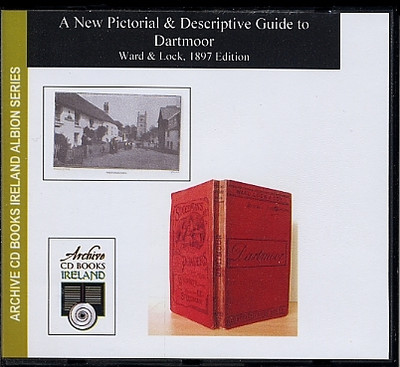 A New Pictorial and Descriptive Guide to Dartmoor

First published in 1897 and republished here on fully-searchable CD-ROM is Ward, Lock & Co's Guide to Dartmoor, the complete title of which reads as follows: A New Pictorial and Descriptive Guide to Dartmoor: its Tors, Antiquities & Rivers, Profusely Illustrated. Containing some 200 printed pages, the original contains a plethora of photographs, illustrations and maps, together with hundreds of contemporary advertisements for the holiday trade in the Dartmoor area and beyond.

In 1854, Ebenezer Ward and George Lock starting a publishing concern and the partnership, not surprisingly, was called Ward and Lock. The business was originally based in Fleet Street, London but, by the 1870s, it had outgrown its premises and so in 1878 the business moved to Warwick House in Salisbury Square, London. In the early 1880s, the company became the proprietors of Shaw's widely-known and well-established series of tourist guides. In 1882, an office was opened in New York, America, and in 1884 a further office was opened in Melbourne, Australia. In the mid-1890s, the company opened an office in Toronto, Canada; however, this was closed in 1919. Ward, Lock & Co., is now part of the Penguin Group.

In a promotional statement from 1924 Ward, Lock stated that 'The use of a reliable guide book doubles the pleasure and interest of a holiday. These well-known books are not dull, dry-as-dust compilations. but pleasant travelling companions, readable from cover to cover. Each volume contains the latest Maps and Plans and is lavishly illustrated. In all cases a much wider area is included than the title indicates, and it will be found that nearly every holiday and health resort of importance is described in one or more of the volumes'. This was no idle boast. By the 1950s Ward & Lock had published some 160 titles in their Illustrated Guides Series covering almost every holiday district and seaside resort of consequence in the United Kingdom and Ireland.

Adopting their familiar red cloth covers in 1892, Ward & Lock employed a special staff of qualified editors and correspondents who continually toured the land, compiling and revising material on all places and matters of interest to the holidaymaker and on such subjects as the local history, geology, botany and zoology of the areas concerned. The level of detail provided for the independent tourist in the so-called 'Red guides' was unsurpassed.

Containing some 200 printed pages Ward & Lock's Illustrated Guide to Dartmoor contains a plethora of illustrations, mostly photographs of the places illustrated in the guide. Beginning in Bovey Tracey and ending in Ashburton the Illustrated Guide provides descriptions of eleven excursions that the independent tourist could embark on. The excursions include Bovey Tracey and its environs to destinations such as Hey Tor, Grimspound and Buckland Drives; Moretonhampstead and its neighbourhood; Chagford and its neighbourhood, including Hunt's Tor and Fingle Bridge; Okehampton and moorland walks; Tavistock and its neighbourhood; moorland excursions from Tavistock, Princetown and Ashburton.

Illustrated throughout with wonderful photographs, detailed maps, many hundreds of contemporary advertisements and wonderful descriptions of the places visited, the quality of Ward & Lock's Red Guides has meant that they have endured the test of time and have already become eminently collectable titles.

This CD contains high quality scanned images of the whole of the original book. This CD has been bookmarked for easy navigation, and pages can be searched, browsed, enlarged and printed out if required.