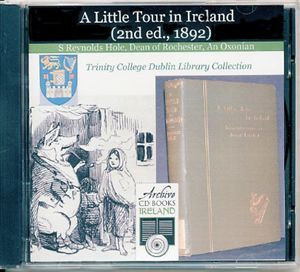 A Little Tour in Ireland

First published in 1859 under the author title of "An Oxonian" this is version is a "new edition" published in 1892. The original release had a very limited print run and there were many calls for a second version to meet demand. Much of this demand was generated by a desire to see the illustrations that accompany the text. Indeed, even the illustrator himself, John Leech, had asked for a new edition to be produced. Leech had died by the time this edition was published. The Oxonian's journey took him from Dublin to Galway, then to Limerick, Killarney, Cork and finally back to Dublin. In-between he visited towns such as Clifden, Kylemore, Glengarriff and Blarney. Also included is a chapter on the famine and it effects in Galway in particular, as told by a local waiter. The author concludes with a trip to Donnybrook Fair and seeing some of the sights before retiring to Morrisson's.

The illustrations, both scenic and humours in nature, are sprinkled liberally throughout the 260 pages adding greatly to its value. This is a worthy addition to the travel writings on Ireland.