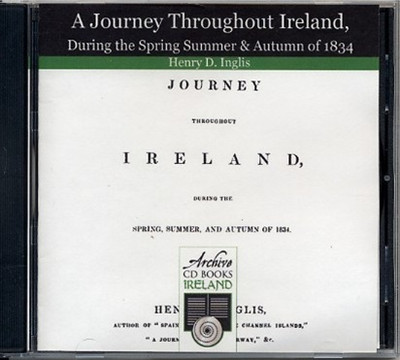 A Journey Throughout Ireland 1834

This book was considered to be one of the most important early nineteenth century commentaries on Ireland. Inglis was a Scottish travel writer and social commentator who published many books concerning various countries worldwide. This was his last title, as he died the following year.

He visited the majority of counties in Ireland, and provides a wealth of information on the social conditions he observed in each location. Even though he travelled in a non-Famine year, the depth of poverty he witnessed was acute. For social historians and genealogists his work is especially useful, providing a eye-witness account of the real life conditions experienced by the general population of Ireland at that time. He also has a lot to say about the consequences of Catholic emancipation, and religion in general.

His book is essential reading for anyone trying to understand Ireland in the 1830s. High quality scanned images of the whole of the original book. This CD has been bookmarked for easy navigation, and pages can be searched, browsed, enlarged and printed out if required.