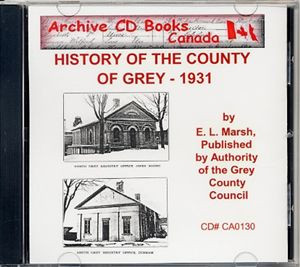 A History of the County of Grey

Another wonderful history of an Ontario County. This one is a little unusual in that it has been sponsored by the "Grey County Council" and so has something of the stamp of official authority. As you might expect it contains the history of the county from it's earliest settlement. The author has devoted the first two chapters to "The Indians" and "Indian Legends and Customs" this being a discussion of the initial interactions of the First Nations peoples with the fur-traders, explorers and missionaries and an account of what was learned from these early interactions.

From this starting point the development of Grey is followed from the making of the first treaties, which made settlement possible, through the establishment of organized communities as we recognize them.

There is a genealogist's "gold mine" in the appendices:
- Appendix A: contains an Alphabetical Directory of Grey for 1865 giving the name of each landowner and their plot's location
- Appendix B: is a list of all those from Grey who served in the "Great" war (1914-1918). The list shows the Contingent, and sometimes the unit, they enlisted in and the municipality in which they enlisted. It also claims to list those "sons" of Grey who were elsewhere when they enlisted but the place of enlistment frequently seems to be within Grey so it is not clear where they actually resided at their point of enlistment. It claims to be as complete a list as was possible at the time (c1930) and indicates those listed who did not survive the conflict
- Appendix C: names of Officials, Wardens and County Councillors of the county from the first provisional council in 1852 through 1931 when the book was published
- Also given are the incorporation dates of the major towns/city as well as the names of the first Mayors