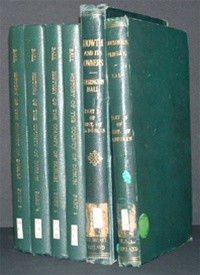 A History of the County of Dublin

The Reverend Francis Elrington Ball's six-volume A History of the County of Dublin was published in Dublin by Alexander Thom and Co. between 1902 and 1920. The subtitle to Ball's publication - 'the people, parishes, and antiquities from the earliest times to the close of the eighteenth century' provides a good indication on the intent and scope of Ball's work, which remains to this day one of the most widely used sources on history of County Dublin.

Ball based his publications on the geography of the civil parishes of Dublin County and provides a digest of the history and antiquities of note of more than fifty in more than 1,100 pages of text, while giving an entire volume over to the history of Howth and its owners. Although Ball did not intend to replace John D'Alton's 1838 History of County Dublin, which had remained the most comprehensive text on the county until the end of the 19thcentury, Ball did intend, and to a large extent succeed in filling in the notable gaps in D'Alton's text, while also recommending A History to what Ball called 'the ordinary reader'.

A History of County Dublin is especially authoritative on the political and ecclesiastical history and the dominant personalities associated with each parish from the mid-sixteenth century until the Act of Union, drawing on sources such as the Reports of the Deputy Keeper of Records; Chancery and Exchequer Inquisitions; Calendars of Irish State Papers; the Deeds of Christ Church Cathedral together with a plethora of manuscript material and published sources as well as seconding many of the most prominent historical and archaeological men of learning to aid his endeavours, such as Tenison Groves, Arthur Vicars, William Reynell and many others. Many sketches, etchings, photographs and maps and provided to illustrate the historical narrative throughout.

As an introduction to each parochial history, Ball provides a reproduction of the Ordnance Survey of Ireland Map for the parish, provides the contemporary townland names in Irish and English associated with each - together with their meanings - and illustrates how these have variously been recorded in the historical annals and how these may have changed over time.

Many recently published well-known works treating on the history of every aspect of Dublin still owe a huge debt of gratitude to the work undertaken by Ball almost a century ago. The current re-publication of Ball's complete History of the County Dublin by Archive CD Books Ireland is fully searchable and is a must for anybody interested in the history of county Dublin.