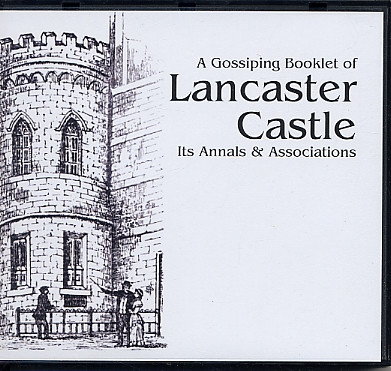 A Gossiping Booklet of Lancaster Castle Its Annals and Associations

Written by Thomas Johnson in around 1900, this small booklet describes the origins of the structure and subsequent changes to Lancaster Castle. Built over 1000 years ago, and used as a jail for the past 900 years, its history starts with its siege by the Scots after the Romans departed.

The booklet contains many anecdotes from the locals of that era. It is the complete handbook "to everything of interest within the walls of this famous structure, whether historical, traditional, tragical, descriptive or exhibitive."

It includes many old sketches of the castle, and those associated with it, inlcuding the hangman "Old Ned" (Edward Barlow) who executed 131 of the 228 criminals who paid the death penalty. Some say that he was "a greater villain than any man he ever put to death. He was several time convicted, and twice sentenced to transportation."

This CD contains high quality scanned images of the complete original book and has been bookmarked for easy navigation. The pages can be searched, browsed, enlarged and printed out as required.