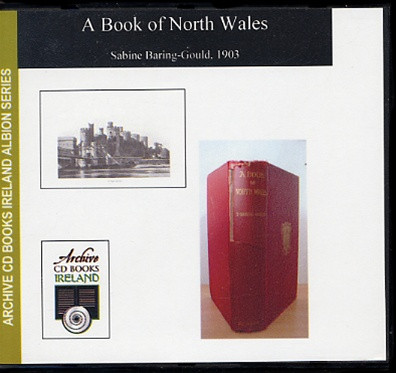 A Book of North Wales

First published in 1903, this was initially issued as a companion to series of books that included A Book of Dartmoor, A Book of the West, A Book of Brittany and A Book of Exmoor, this publication was intended for an English readership who often puzzled over Welsh history and according to the author 'without a knowledge of the history of the country in which one travels more than half the interest is lost'.

The author, the Reverend Sabine Baring-Gould (1934-1924) was an eclectic English scholar, hagiographer and antiquarian, who by the time of his death could boast of more than 1,200 separate publications. Born in Exeter, Sabine's father was a member of the Baring family of bankers and spent much of his time travelling around Europe. As a consequence much of the child's early education was given by private tutors. Graduating from Cambridge with the degrees of BA and MA in 1864 he was appointed curate of Horbury Bridge in Yorkshire. He married Grace, a mill hands daughter, a marriage that was to last for forty-eight years and produce fifteen children. Inheriting the 3,000 acre family estate of Lew Trenchard in North Devon in 1880 and when the living of the parish of Lew Trenchard became vacant the following year he appointed himself parson.

Baring-Gould regarded his collection of folk songs principally from the west country as his greatest achievement and many of these were brought to publication for a mass audience with the addition of music by Henry Fleetwood Sheppard and Frederick Bussell. Apart from his passion for folk song, Baring-Gould was also a an author on many facets of folklore, including werewolves. His publication, the Book of Were-Wolves (1865) remains one of the most frequently cited on the subject. Sabine Baring-Gould will also be remembered as the author of the popular hymns Onward Christian Soldiers and Now the Day is Over.

Sabine Baring-Gould's A Book of North Wales fit very well with his major passions that of folk song and folklore and he found much in Wales to kindle these passions. Containing sixteen chapters the reader is introduced to the 'Welsh People' and their nation at the start of the English conquest. From here Baring-Gould travails through Anglesey, Holyhead, Bangor, Snowdon, Lleyn and Conway before ending at Machynlleth, the chapter for which is introduced with a photograph of Owen Glyndwr's house. Each chapter is illustrated with folklore, stories, songs, anecdotes and many illustrations, the majority of which are photographs by Valentine & Sons and Frith & Co. The originally publication is fully-indexed and is much much more than a general introduction to North Wales. Baring-Gould's work in collecting folklore and folk song in the West of England is now recognised as the saving of these for posterity. Although no such bold claim can be made for A Book of North Wales the emphasis on collecting folk memory for posterity is redolent throughout the publication, making for a fascinating read.