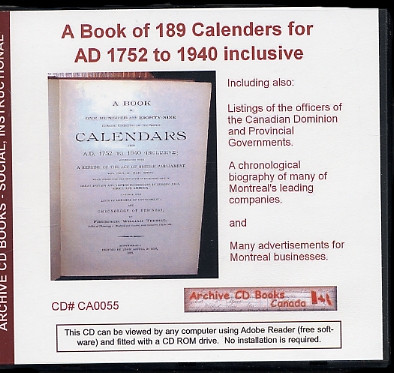 This is a book every genealogist needs, and at a great price too!

The book's Introduction explains why, and how, the change from the Julian to the Gregorian calendar was made in England in 1752 when, at the same time, the start of the year was moved from the 25 March to the 1 January. The first of the calendars shown in the book is for the year 1752 where it can be seen that in September, Wednesday 2nd is immediately followed by Thursday 14th.

To round out this little gem of a book the author, a well known figure in Montreal and member of a leading family of Montreal lawyers, included a listing of the Officers of the Canadian governments and what he terms a Chronology of Business. Today we'd call these business biographies and they will provide valuable information to anyone researching an ancestor who operated one of these businesses. There are many advertisements for Canadian business including, of course, many firms of lawyers.

Lets say you have an ancestor who married on 28 September 1799. Have you ever wondered what day that was? Well if you had this book you'd already know it was a Saturday. On the other hand you might be more interested to know that 4 July 1776 fell on a Thursday.

The book's Introduction identifies the years in which most European countries made the same change and reports the confusion which occurred between correspondents in these countries in the intervening years. Even England and Scotland had used different calendars so that the 24 March 1710 in England was the 24 March 1711 in Scotland. Or, if you had ancestors born in a Catholic country on 10 October 1582, you would know the date was erroneous because the 5th through the 14th didn't exist in those countries.